After trying the food samples of Minami at Tonari Gumi’s Sake Festival, Jax and I have been itching to go to the restaurant to try the food.  Hearing really great things about their Omakase, we decided it was the Chef’s Menu, or bust.  Attempting to make reservations following the symphony we attended last week, our aspirations were crushed when they were denied, due to the annual Taste of Yaletown event (those bastards!)  Undeterred, we decided to go midweek after the end of that event.

Located in the heart of Yaletown at 1118 Mainland street, I remember when it was Goldfish (yes, that’s going back a few years now …)  Parking is a bitch around there.  It was much easier to park a block away and then walk there.

Upon arrival, we were led to our table which had a little surprise waiting on it.  Just a little note, hand written and personalized, it definitely was eye catching and set the tone for the night. 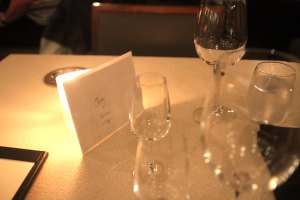 Our server came by quickly, and introduced himself.  He saw me looking at the cocktail menu, and twisted my rubber arm to get the sake pairing.  Offering 1 or 2 ounce pours, as well as a wine pairing, both Jax and I decided on the 1 ounce.

Letting us know that we would have 8 courses, he told us to take our time, and just enjoy the meal.  The restaurant was at full capacity, and true to his word, we were never rushed.

Starting off, the amuse bouche and sashimi platter came out together.

The amuse bouche was an edamame mouse with shiso on top.  Jax adored it.  I thought it was interesting, as it was something I’ve never had before.  The texture was smooth, without any grit at all.

I call the next part a sashimi platter, even though it had deep fried soft shell crab on it.  Wild sockeye salmon, uni, blue fin tuna, red fin tuna, king crab … basically every sashimi that you would want, was here.  The king crab, uni and red fin were served pretty basic — the crab was most likely lightly brined in salt water, and that’s it.  The uni and red fin were untouched.  The blue fin had a ponzu sauce, which I think killed the natural flavour — completely unnecessary.  The salmon also had a strong sauce on it, although I didn’t mind it.  The real star though, was the ankimo.  I’ve never had monkfish liver before, and it was a treat!  Much like fois gras, this is something I would seek out to order again. 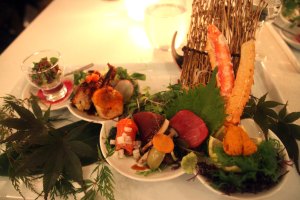 Side note, look at the presentation!  Quite pretty, however there was one downside.  The natural leaves, which were picked fresh, had insects on them.  After the plates were taken away, I noticed 2 small insects crawling on the table.  Could there have been more that we ate and didn’t notice?  Probably.  More flavour 🙂

Next up was the sushi platter.  Having sampled the aburi previously, we were looking forward to how they would present this!

Unagi, BC spot prawn, either hirame or kanpachi (… bad memory, totally deaf — take your pick) tuna aburi, and wild boar bacon with wild salmon graced this place.  Complete with the head of the spot prawn that was entirely edible, no piece of sushi needed any soy nor extra wasabi.  The miso reduction served as extra flavour if needed, but I didn’t use it.  The disappointment of this plate was without a doubt the wild boar bacon with salmon.  As the bacon was served cold, the fat congealed and was not a pleasant texture.  The aburi was good, but not the star.  Surprisingly, we both easily picked the spot prawn as what we would come back for.  Topped with black truffle, the flavour was outstanding, but not the main attraction.  Biting into it, the prawn completely melted away in your mouth.  Hidden underneath the prawn was a creamy layer which we couldn’t figure out what it was made of. 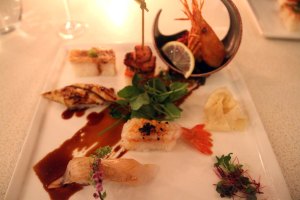 At this point, our waiter asked if we would like a break between courses.  Hell no!  Keep bringing out the food!

The next course was the beginning of the cooked food.  Served on a hot Himalayan rock salt, we had prawn, mushroom, wagyu beef, scallops, and okra.  The recommendation was to flip each item for a quick sear, and then eat it.  I prefer items rare, so I ignored the advice completely! 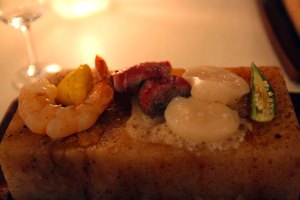 Paired with this, were 4 sauces which we were told would go with any item.  Squid ink lime, wasabi salsa, miso, and black garlic were the dipping choices.  Jax kept going back to the black garlic and wasabi salsa.  I preferred the miso, as well as the salsa.  Each was decent. 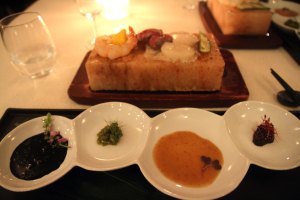 As for the proteins, I’m not a fan of okra, and this did nothing to change my mind.  The scallops and prawn were as expected.  They tasted great with the sauces, but were completely average on their own with just salt.  The wagyu beef was excellent — especially without searing it on the other side.

Our waiter was very friendly, and attentive.  He explained things very clearly, and was actually quite fun to talk to.  He saw me take out my camera, and so we started talking about photography.  This led to a larger conversation, and he fit right in as if he was a close friend.  If you ever go there, I am happy to recommend Juan as a server!

The next course that awaited us was the cooked fish round.  Sablefish with eggplant in dashi, with shiso foam.  Yeah, they didn’t go full-on fusion with this dish or anything!  While foam is impressive to look at, it really doesn’t do anything for the dish taste wise.  It’s a good thing the sablefish and dashi were more than strong enough to stand on their own!  Jax’s favourite part of this dish was the eggplant.  I loved the dashi.  The sablefish was moist, and light — but we both loved the accompaniments more!

The sake pairings to this point have been good, but I wouldn’t call them spectacular.  I enjoyed each serving, but not enough to remember anything about them.  The pairing for this dish completely changed that though.  While I don’t remember the name of the sake, it paired with the dashi absolutely perfectly.  I kept taking one spoon of dashi, then a sip of sake.  The dashi was quite flavourful, while the sake counterbalanced it perfectly.  This was the one time in the meal where I actually felt the pairing was worth it. 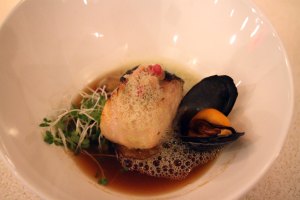 Counting how many courses we’ve had, both Jax and I were starting to hit our limits.  However, for the sake of this post, we MUST go on!

The next dish completely caught us off guard.  After having so much delicate and meticulously prepared food, suddenly a huge plate of meat was infront of our faces.  Shortrib with cherry tomatoes, and a kabocha croquet.  Our appetites were suddenly hit with a sledgehammer.  We threw in the towel, and ended up packing up this round to go.  I was impressed with the kabocha the most.  It was flavourful, and also had a nice variety of textures in each bite. 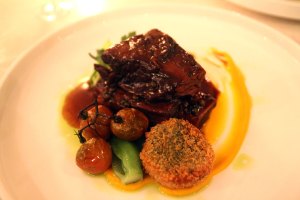 Winding down, we had a palette cleanser to get ready for dessert.

A frozen champagne shiso  shooter was welcomed with open arms.  The frozen raspberry on top gave it just that little kick that it needed.  Trying to eat it with the tiny little baby spoon was futile.  We literally ended up shooting them.  So much better that way! 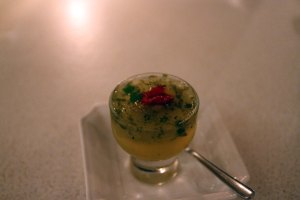 Finally we ended off with a duo of desserts.  Salted miso caramel ice cream, and sake cheesecake were presented with yuzu jelly and candied pecans.  The caramel too thick and sweet for my liking, however the cheesecake was my kind of dessert!  It also went well together with the yuzu jelly, and pecans.  I could’ve skipped the ice cream … but I didn’t, you know, for research sake. 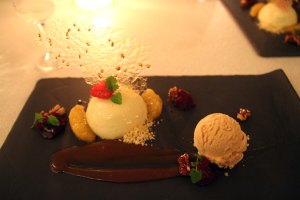 2.5 hours later, this meal was an experience.  Top notch service with a truly genuine waiter does make a difference when you are paying $125 per person for a meal.  Throw on $35 for a sake pairing, with automatic gratuity tacked on, and you are looking at 2 bills a head.

Jax and I have dined at Michelin Starred restaurants, Top Chef winner restaurants, celebrity chef restaurants, as well as other fine dining establishments.  We would actually rate this experience better than a 2 Michelin Star restaurant we ate at (!?!) as it caters more to our style.  It blows away other so-called best of Vancouver restaurants that we don’t particularly think deserve that title (I’m looking at you Hawksworth)

We understand that having an Omakase can be a wildly different experience for any number of people.  Jax and I want to do it again, to see how consistent the food quality, and service is.   However, from this one time, we thoroughly enjoyed it.

No numerical rating for this post.  Just a simple if you have the chance to order the Omakase at Minami, do it.