So as most of you know by now, CS has a white flour allergy which has led to some interesting food substitutions.  The most significant one I’ve been on a search for is pasta, which I loooove.   We’ve tried quinoa spaghetti, brown rice lasagna, 100% whole wheat linguine and, surprisingly, the list goes on.  I’ve been really impressed with the variety of gluten-free options out there and most of them have tasted pretty good.  Guess it helps when you smother it with meaty tomato sauce and cheese.  One of the substitutes I’ve heard of and always wanted to try is spaghetti squash.  What is this strange food enigma which is a squash but comes in noodley strings???  Can it really be used in place of spaghetti??  Apparently…yes, it can! 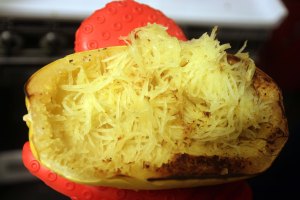 All you need is a good-sized spaghetti squash, some salt and pepper, aluminium foil and a baking sheet. 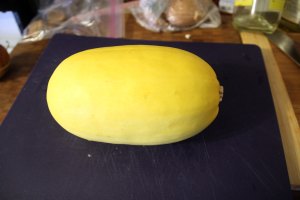 This one was smaller than the size of my head. I washed the outside just to be safe…you never know if it fell on the ground at the supermarket, blech.

Now the hard part is cutting it in half.

I didn’t expect it to be so hard so I tried our chef’s knife and eventually had to resort to the cleaver. I didn’t cut with my left hand but as you can see…much easier 😉

Now that I had 2 halves, I had to scoop out the seeds, which we ended up drying out and will try to plant in the spring.  Just use a spoon and you’ll find the insides dryish and stringy.  Scoop out as much of it as you can.  The squash is quite hard so you don’t have to worry about scooping out the “meat” by accident. 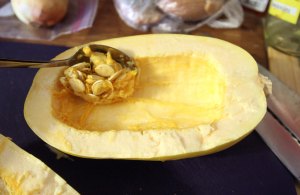 Now that it’s cleaned out, just sprinkle liberally with salt and pepper.  I used kosher salt just cause it was coarser.  If you want it to have a little flavour you can sprinkle with herbs or garlic but it won’t penetrate so I didn’t bother.

Now place on a baking sheet with the insides down and hard shell up.  I covered the sheet with parchment paper first for easier clean up. I also included some garlic heads that I was roasting to use up space on the sheet.

I covered the squash with aluminum foil to keep it from drying out.  I don’t think it matters since you have the insides down but I figured it would help with the roasting.  Set your oven timer for an hour and wait.  Easy!

So the end product looks a little brown on the edges and you can see the strings.  It was tender to the touch and easy to scoop out. 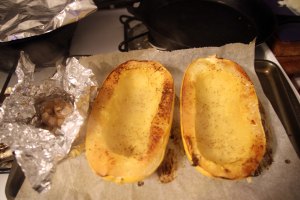 Now, the fun part.  Just use a fork and start dragging along the squash.  The strands come out really easy with minimal effort and feel just slightly crunchy but still tender. 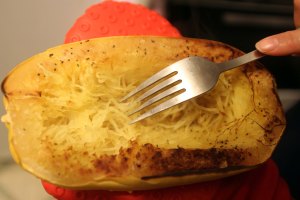 And, voila, you end up with what looks like a nest of yellow spaghetti strands 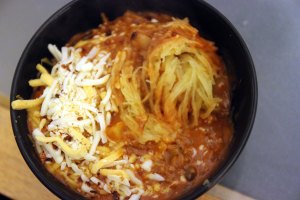 CS could only eat one bowl since he found it quite filling due to the squash but the calories are minimal compared to carb-loaded spaghetti and I ended up having 2 bowls cause it was so yummy.  I found the texture slightly crunchy, which I really liked.  It certainly does NOT taste like traditional pasta but it’s much healthier and if you can’t have gluten, it’s a great way to enjoy your pasta sauce without any stomach aches after 😉  I already have another squash waiting in the fridge for next time.