For those of you whom follow this blog, you will have noticed there was no post last week.  No, I didn’t forget — Jax an I were celebrating our 1 year anniversary back in the Caribbean!  Staying at the VH Gran Ventana in Puerto Plata in the Dominican Republic, we enjoyed a week of pure relaxation!

The food at this all-inclusive was pretty decent, so here are a few pictures!  Excuse the quality, as I did not bring a camera along.  All pix were taken with cell phones (iPhone 6+, Nexus 4, and Lumia 920).

This surprised us as being pretty decent!  We actually really enjoyed the buffet food.  All of their chicken dishes were AWESOME.  Jax enjoyed the pasta, while I stuck to meat and seafood.  The only problem was their red meat.  None of it was the greatest; it was usually leathery and tough, or had a wild flavour to it.

Desserts were limited, but okay.  The Ice Creams were great!

This was a little bit of a let down.  With 3 a la carte restaurants, none of them were spectacular.  Each was average.  The first one we tried was their Ocean Grill, which served almost exactly the same food as the buffet.  We didn’t bother taking any pictures of that food, as it was all casual fare.

The next one we tried was the Caribbean style food.  Being Trini, I would call this definitely Tourist-Caribbean food.

Appies were quite salty.

The mains were pretty good, but also salty.  The goat curry was the best thing there.

The final restaurant we tried was their Italian offering.  Every other reviewer called it the best restaurant on the resort, however I would just call it the nicest restaurant.  Maybe the food was more familiar to those other people, but it was also average at best.

The appies were pretty, but not really flavourful.

For the mains, we stuck to Pasta, and they were very al dente.  They too, didn’t have too much flavour.

Desserts at all restaurants were exactly the same as the buffet. 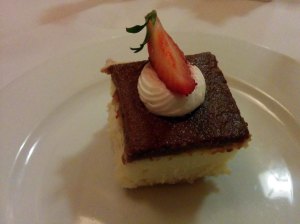 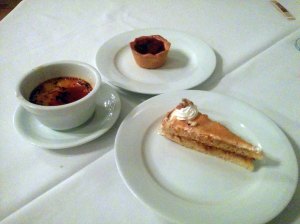 Overall the food was decent, mainly due to their expert cooking of chicken.  The one dish I kept going back to over and over was their fried chicken.  The skin was delectable!

I can’t finish this post without mentioning their drinks.  Most of them were quite sugary, and not very strong.  Not until we found a good bartender and tipped him, did we get some really good drinks with their yummy Caribbean rum.

Overall, I would recommend this place, and, as they say over there, the place was Excellente!