While we were in Los Angeles for Jax’s cousins wedding, we learned that one of our favourite Top Chef personalities had a restaurant here through Jax’s brother.  Michael Voltaggio, winner of Top Chef season 6, has a restaurant specializing in small plates that are meant to be sampled and shared. 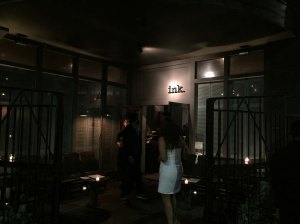 Upon getting seated, the waitress asked if it was our first time there, and explained to us that generally 4-6 dishes was a good amount of food for two people.  Looking through the menu we decided to go with four. 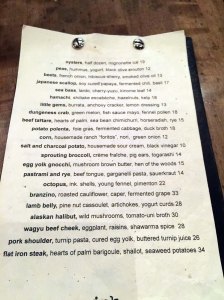 Tempted to get the Kushi oysters, we ultimately decided against it due to wanting to try some things we don’t normally get here at home.

Settling on the Japanese scallop, potato polenta, egg yolk gnocci, and lamb belly, we went for a cross section of seafood, veggies, pasta and meat.

Side note, the cider I ordered was not my favourite drink.  I’m more of a Strongbow fan, so when I had this See Canyon Hard Cider that tasted more beer than cider, I wasn’t too keen on it.

The first dish that came out was the scallop.  It was an interesting combination of flavours that we haven’t had paired before.  We found that we had to eat every component together otherwise each individual ingredient did not taste very good.  The papaya really made the dish stand out.

This dish appears to be one of their signature dishes.  Looking around the restaurant, every table had ordered it.  After digging in, we were able to see why.  I’m not generally a polenta fan but this was prepared extremely well.

The gravy was rich, and how can you go wrong with foie gras?  The only thing we did notice, was that it was perhaps a little too rich.  For two people sharing, it was fine.  If you are going at it solo, you may have a hard time eating it all. 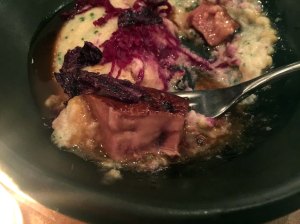 When it comes to pasta, we love our runny eggs!  There’s nothing quite like cutting open a pasta and seeing the yellow yolk ooze out of it.  We were every excited to see if this would live up to our expectations. 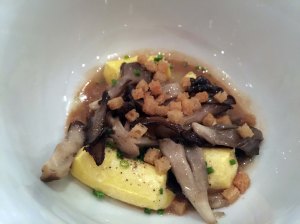 Cutting into the gnocchi felt very odd — the ‘pasta’ was extremely light and spongy.  It felt more egg like than anything else.

What was revealed? Runny yolk!

Not as runny as I’d like, but still not bad.  This dish was pretty good too though.  Once again, it tasted better when you had everything together in one bite.  Overall it was decent.  Not great, but good.

This is the dish I was excited for.  We don’t see lamb belly served here often, so I was curious to see how it would taste.  Getting two decent sized pieces, the portion was pretty good.  I found there was too much pine nut cassoulet though.  I was least impressed with the preparation and cooking of the meat though.  I was unable to cut through the layer of fat with my knife.  When asked for a sharper steak knife, they did not have any — I had to saw away with my table knife.  Not a pleasant experience.

Jax’s pork was better however, and she had no difficulty in cutting through hers.  The fat was rendered properly and much better.

Overall I was disappointed with this.  I would not order it again.

Surprisingly, the dessert was phenomenal.  It completely blew us away with its creativity, presentation, and flavour.  A play on a peanut butter and jelly sandwich, it completely deconstructed it, and re-constructed it with one of my favourite flavours, coconut.

Just looking at it, you know it was going to be great.  Whipped strawberries, coconut ice cream, peanut butter infused bread and sauce — take a little bit of each together and it was pure heaven.

As a whole, this restaurant was very solid.  Every dish we had was unique in flavour and texture, and completely different from anything we ever had before.  We really liked the inventiveness of each dish, as well as the flavour.  It lived up to our (pretty high) expectations for a top chef winner!

The real question is, how does it compare to the other top chef alumni places that we’ve been to?  Overall, a fraction of a hair below Richard Blais, but miles ahead of Brian Malarkey.