I have a long time IRC friend, named ‘Chuck-Norris’ who always talked about having Smörgåstårta – Swedish Cake Sandwich.  Traditionally (I’m told) this is served for special occasions, such as a birthday.  Looking at the pix made me drool!  This is something that is not sold, nor made here locally, so I had to guess at how it was supposed to look, and taste like.  This was my first, and only attempt (so far) at making one.

Check out all of the ingredients that go into it!  This was the first time I had ever used quite a few of these things, such as capers. 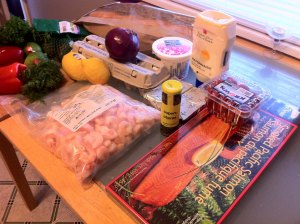 This Smörgåstårta is made up of many layers, each with a distinctive flavour.  Take a look at the filling of each layer.  All I can say is SO MUCH PREP WORK!  I need a sous chef!! 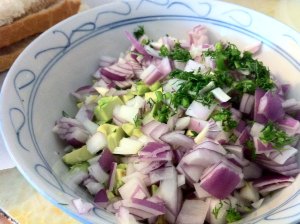 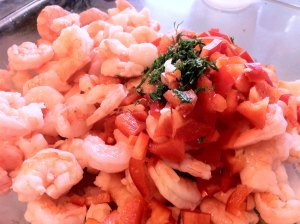 Each of these was bound together with the same crème-freche-like sauce:

Once again, check out the pictures of the assembly: 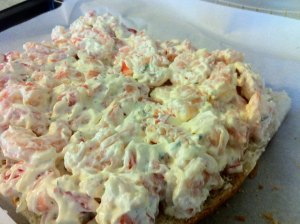 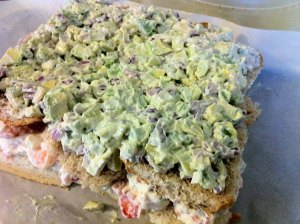 Finally the smoked salmon and capers.

Top it off with another layer of bread, and then decorate!

Ta-da!  And there you have it.  Smörgåstårta.