Another old one today — This is Trinidadian style aloo roti!  It’s not very special, but it’s a staple and tastes great.  I’ll definitely do a new post after I get caught up with all of the old stuff, with a better write up for roti, but for now, you get this!

This is the one dish I learned how to make from my mom.  no measurements.  no written recipe.  pure feel.  Take a bowl of flour, add a spoon of baking powder, some salt, and bam, there you have it!  This is probably the basis for why I cook the way I do now, and don’t believe in following recipes.  Make changes in the moment, and make it taste good by sampling while you are making it.  That’s how she made roti.

Its fairly simple to make, however most trini’s would find it difficult making it in Vancouver due to one reason — temperature.  The loaf doesn’t rise as fast nor as much, and everything takes longer.  Tropical vs pacific makes a huge difference.

Aloo Roti is basically rolled dough, with potato in the middle.  Once again, due to my awesome stomach condition, I make whole wheat roti.  White flour makes it taste 10000000x better though.

To make the dough, just add flour, baking powder, salt, and water.  that’s it.  Pretty simple eh!  The stuffing is boiled potato, cumin (jeera), salt, black pepper, green onion/chives, and you can add in a few extras to personalize it.  Paprika is okay, some garlic and onions never hurt.

Make your dough ball, and then portion them out into 1/2 a fist size balls.  Set them aside under a cloth for an hour or so and let them rise.

After that is ready, make a cup with your hand, and stretch out a ball so that there is a nice even layer with a pocket in the middle.  Add in a giant scoop of the potato mixture, and close the ball, so that no potato is showing (think dumpling)

Roll the ball out nice and thin.

Immediately after rolling, put it on a medium-high heat tawa, or in my case, cast iron pan.  Make sure the pan is oiled!  Brush some oil over the uncooked side of the roti.

After about a minute air pockets will form with all of the steam, and that will mean that one side is ready.  Flip it over and let it rise. 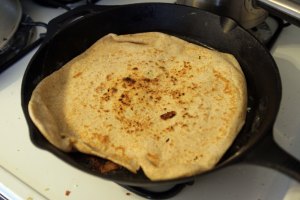 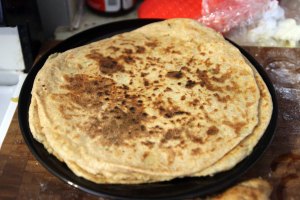 Ta da!  There you have it!  Trini style roti!

(yes, I know, this is not my best roti.  as I said earlier, I will do it again with a full writeup and pix)