Back in 2013, my colleague (and high school mate!) recommended I hit up Eleven Madison Park in NYC — he assured me it was his favourite restaurant.  Never having gone to a 3 Michelin Star restaurant before (nor 2, nor 1!) I was slightly scared of the price.  At that time, there was one price, and you had to get the chef’s menu.  No ifs and or buts.  Keeping that in mind, I went in expecting that I had better be blown away, or it would be a disappointment.

Being prompt right at noon, when we got to the restaurant all of the staff were having their morning meeting. 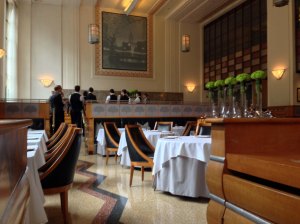 We were seated in the lounge area, where I read one of the Head Chef’s (Daniel Humm) books.

One of the things I pointed out when we were given a call back, was that I had my white flour allergy, so they prepared a separate menu from me.  Jax had the regular menu, with all it’s white flour goodness!

Jax ordered the wine pairings, whereas I just ordered a highball.  Being in NYC, why not order a Manhattan?

Served old-school style, the bartender came out and prepared it infront of us.  Pretty cool.

The first course came out, and we then understood how the meal could last 16 courses.  More like an amuse bouche, this was a single cookie that was eaten in one bite.

I’m not going to go into much detail about the taste of each dish, because for the most part, every-single-last-one of the dishes were beyond greatness — I’ve never experienced tastes or presentations like them every before.  There were a couple exceptions of course, but you can’t please everyone with 16+ dishes.

Next up was the Oyster.  This was one of the dishes which was only good, not over-the-top-great.

The Sea Urchin went back to being fantastic.  Just look at it, and you know you are in for a treat! 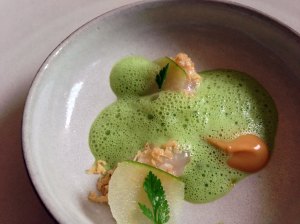 Being nosy, and wanting to see everything I could about the restaurant, between courses I took a look at the plates, and cutlery.  Of course they were all monogrammed.  I lifted the charger plate as well (the big plate under all of the regular plates) and I was amused to see it super dusty underneath.  Trying not to exaggerate, there were dustballs lining half of the circumference of the charger.  Joking with the server, I quipped ‘guess the plates get better with age!’

Now, I take it that this was a huge no-no for them, as I saw the waitress talking with the manager, who then talked with the kitchen staff all in the corner of my eye.  They tried to be discreet, but these are the type of things I love looking out for.  Back to the meal for now …

The next dish, the Sturgeon came out.  The Sabayon with Chive Oil was my favourite.  I actually have now acquired a tool to cut eggs perfectly, as shown below 🙂

At this point, I was beginning to understand how restaurants get 3 stars from Michelin.  With every course, we got new plates and utensils.  The servers all walked a specific path, never deviating from it.  It was as if each walkway had one way arrows — even if the table was literally within arms reach of the kitchen, the staff would walk the entire path until they got to their destination.  If there is one thing that I love about being in IT and Change Management, it is that there are SYSTEMS in place!! 🙂 🙂 🙂  This was a HUGE +++ for me!

The caviar was absolutely amazing.  Here you can see how the white flour-free menu differed from the regular menu.  I didn’t get bread; instead I got a cracker.

It was at this point, our waitress asked if we would be interested in visiting their kitchen, and have a cocktail made table-side for us.  OF COURSE WE WOULD!  Being led into the kitchen, I glanced back and saw they wasted no time in changing the entire table setting — cloth, centerpieces, cutlery — everything.  Another thing I noticed, was that they moved the entire table when Jax stood up to leave.  Another nice little touch!

Once in the kitchen, one of the chef’s made a molecular-gastronomy-type drink.  It was pretty cool (both literally and figuratively — liquid nitrogen!)

While watching her, we also watched all of the other chef’s do their thing.  Take a look at how spotless the place is.  You could easily perform surgery there!  We got to meet and talk to Executive Chef Daniel at this time as well!

The final result was something that you cracked open, and watched the liquid ooze out and mix with the alcohol.

Back at our table, it was as if nothing happened.  You want to learn how to deal with minor things like a little dust?  Take notes and learn from them.

Foie Gras was next.

The regular and white-flour-free versions were completely different!

The Carrot dish blew me away.  Who would’ve thought carrot would be so good? 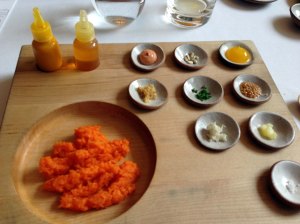 By this time, Jax was getting a little tipsy with the wine pairings.  The glass was never less than 1/4 full.  The waitress ensured that it was always topped up. 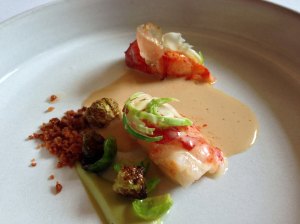 And then the Cauliflower. 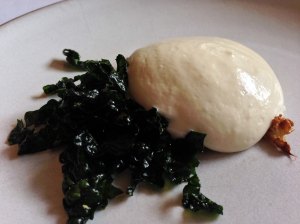 Three chefs came out to present the Duck to us.  Only one of them actually talked, the other two were obviously very junior, but looked like his groupies.

I personally disliked the duck.  As a signature dish, I thought it tasted disgusting.  But that is because I didn’t like the spices they used.

The next dish made up for it — it was basically a Picnic!

Again, for the Malt and Chocolate drink, it was all tableside presentation.

The next four dishes were desserts.  I love my desserts.  I think I was getting tipsy at this point, so I didn’t take all the pictures.  I got the Mint dish and Sweet Potato, but missed the Pretzel and Cinnamon.

A nice warm espresso is always great at the end of a meal. 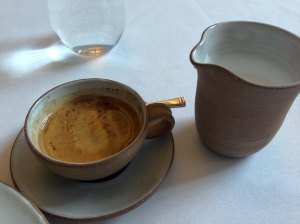 Before serving the Chocolate, they had a little presentation.  In a custom deck of cards, each card had a different ingredient on it.  You were asked to choose one.  I saw bacon on one card, so as Sue (our waitress) was shuffling the deck, I counted the cards.  Sure enough, I picked it (luck? what luck?  All skill! 🙂 ) but then she ‘eliminated’ that as a choice.  PFFT.  She palmed a couple of cards back on the deck, and flipped them over.  Espresso and pomegranate.  We flipped the chocolate pieces over, and those just happened to be the flavours of the chocolates we had on our dishes.  MAGIC.

To top it all off, completely unexpected, the waitress brought a full bottle of Apple Brandy, and said ‘have as much as you want’ … By this time though, they know that it’s pretty much impossible to drink very much, so it’s safe to assume that people won’t go through the entire bottle.

PS, this is what their monogram looks like, without any dust. 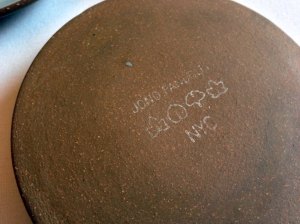 Finally, as a parting gift, they packed up a mason jar of granola, and told us they’d given us breakfast for the next day.  Wow.

The experience was so memorable, that we bought the cookbook, got it signed, and have it proudly displayed.

I would go back there in a heartbeat.