After being open for just a short 6 weeks, Jax’s brother arranged a dinner for his birthday at this newest must-go-to spot.  Located at the far end of Burrard on Hastings, it’s in prime parking-ticket territory.  Nightingale is the newest offering from [over-hyped] famed restauranteur David Hawksworth.  Even though his flagship restaurant has received rave reviews from the masses, Jax and I didn’t have the magical experience that we were expecting from supposedly the best restaurant in Vancouver.  Keeping that in mind, we were not actually expecting too much from this place.

Our party was escorted up to the second floor, which is where I would recommend to ask to be seated.  Getting to watch the cooks work their flair in the open kitchen is always fun!  While this is a more casual place to dine than Hawksworth, I did notice the majority of men wearing collared shirts, and women wearing business casual blouses or dresses.

Our group was quite happy with the share-plate design, as we always eat our meals family style anyways.

To start, I tried their Far from the tree cocktail.  Similar to a negroni, I enjoyed it.  Our table also tried a few of the other cocktails, as well as the Nighting-ale that was on tap.  They were all generally well received.  Nothing to die for though.

From the Raw menu section, the first dish out was the Amberjack Crudo.  I guess everyone has been watching top chef, since crudo’s seem to be the go to dish.  As much as it pains me to say this, it was actually really good.  Almost like how pork belly was the must-have menu item of the past few years, crudo’s seem to have taken its spot.  I enjoyed the spicy kick it had, however those with more sensitive palates found it too spicy.  Too bad for them!

The Beef Heart Tartare is something that you should order.  This was definitely not lacking in flavour!  Sometimes I find heart to have too sharp of a flavour profile, but this one worked well with all of the accompaniments.  Protip: if sharing this dish, use a steak knife to cut through the bread.

Onto the vegetable section, the highlight was the Maitake Mushrooms.  Brown butter, hazelnuts … are you sure this isn’t a dessert?!  Like the dish before it, everything worked well together.  My only complaint is that I felt it should’ve had one or two more mushrooms. 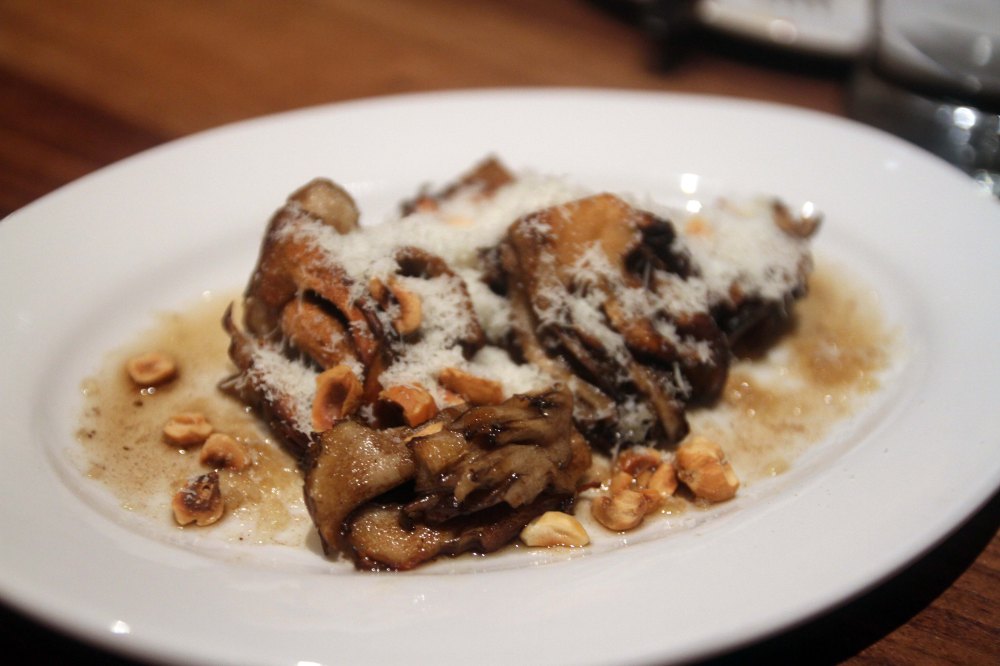 Don’t order the Turnips.  Jax thought more highly of them than I did.  I did not like this dish at all.  Too sour.  Too bitter.  Meh.  Looking over at the table beside ours, their French fries (I mean frites) looked infinitely more appetizing. 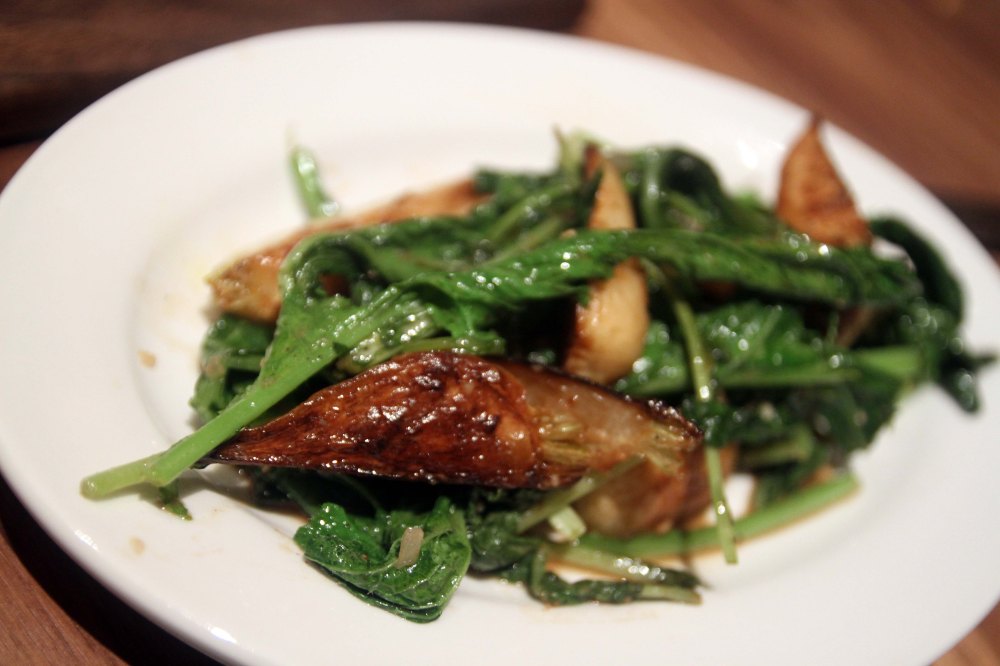 If you can only order one dish at Nightingale, do yourself a favour and get the Octopus.  This was the first of the Small plates that came out, and it was the best.  Everyone at the table enjoyed it so much, that we ordered a second one!  The tentacles were crispy, and the flesh was tender.  Jax compared it to pork belly (?!) and I could see why.  Everywhere else we’ve tried grills their octopus, or slices it thinly.  This was completely different where the ‘skin’ crackled in your mouth!  Not only was the texture impressive, the sauce was rich and flavourful.  The description said there was fermented chili, but we didn’t taste any.  No matter, as it was perfect the way it was presented.

The Tripe was decent.  It’s nice seeing western restaurants use all of these ingredients that the rest of us have been eating for years.

The birthday boy is a huge fan of charcuterie, so we had to get the Prosciutto.

The focaccia it came with was great.  Note: as with most fine dining restaurants, they don’t offer a gluten free/whole wheat/any other option for bread. 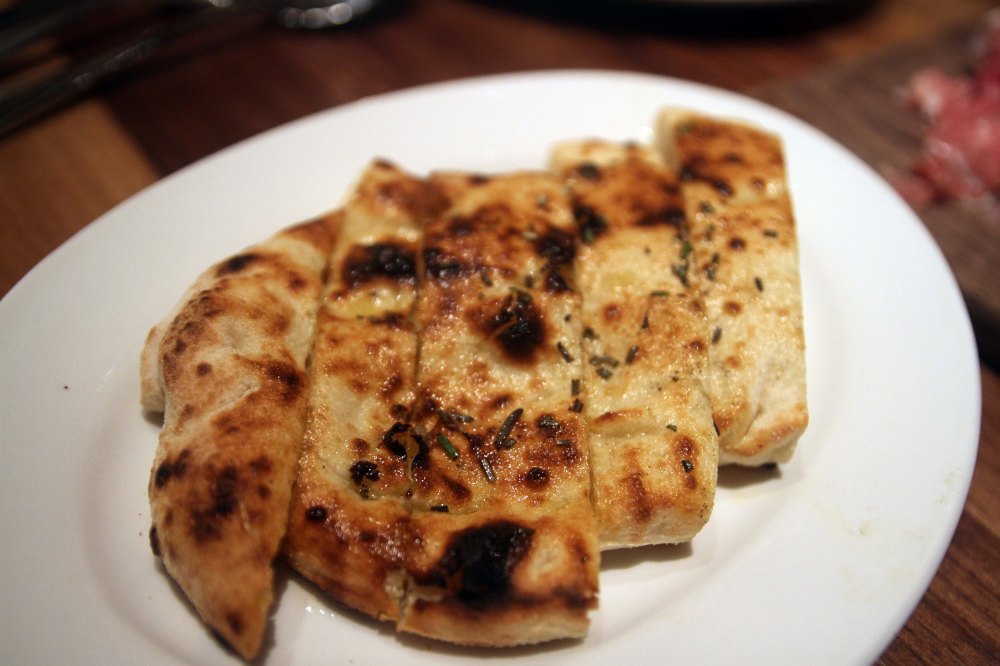 Having just gone to Via Tevere last week for some absolutely AWESOME pizza, it was fresh in our mind for a good head to head comparison.  The styles are exactly the same, however Via Tevere takes this round.  Cooked in similar fashions via their huge superhigh heat oven, they had similar offerings, and similar tastes.  The cream sauce is what set Via Tevere apart for me.  The dough at Nightingale was better.  I didn’t like that this pizza didn’t have a uniformity of toppings nor sauce.  the entire outer edge had nothing on it — just plain dough. 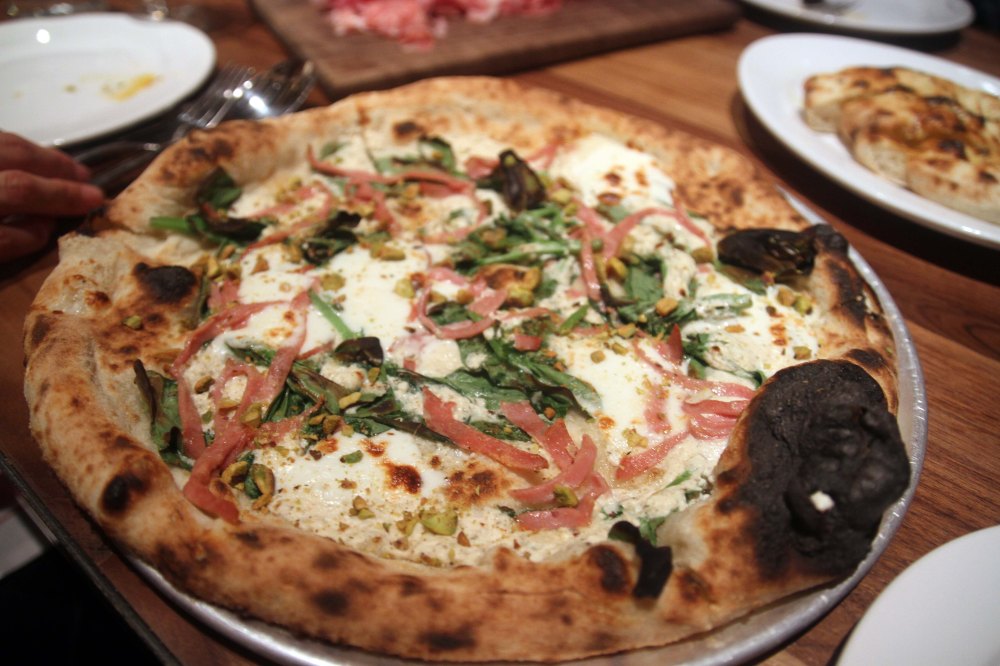 The Large dish we ordered was the weakest overall.  The flavours and texture of the Casarecce & Rabbit did not work.  The lemon was overpowering, and the pasta was too al dente.  I’d skip this one. 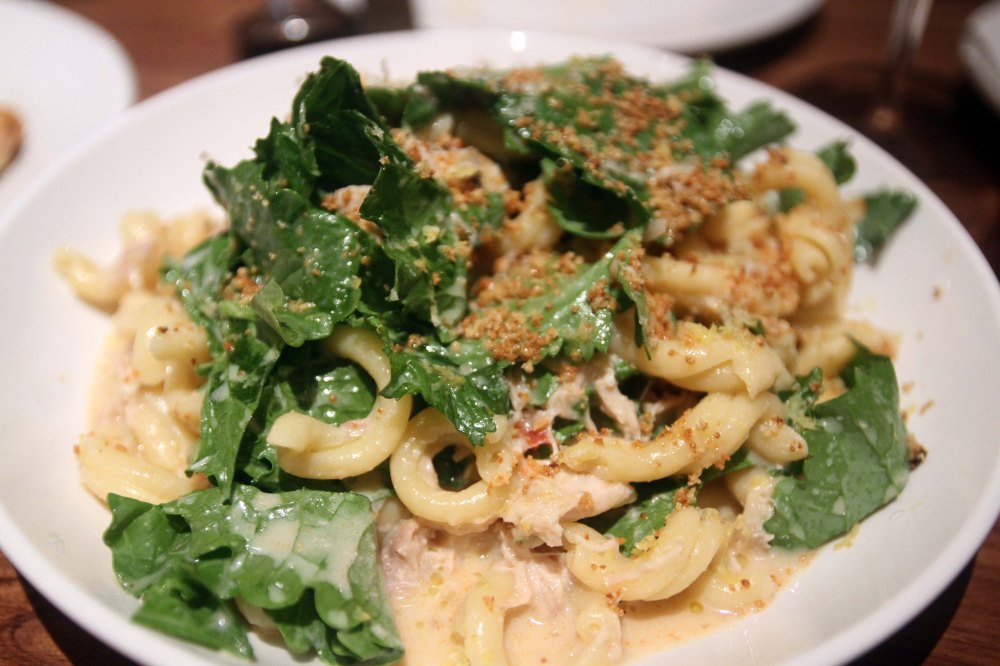 Dessert time!  Jax really wanted the Lime crème, and she enjoyed it.  As you can tell from the picture, they copied my plating by arranging all the ingredients on the side.  Yup, I’m absolutely positive David Hawksworth read my Cheesecake post and copied it.

One problem.  MASON JARS.  ARGH.  Stupid hipsters ruining everything!!  Serving food in mason jars is NOT COOL.  When will people learn?!  This was most definitely the lowest point in presentation BY FAR.  Remember kids, just say no to mason jars!

When asked about what the most popular dessert was, our waiter noted that the Salted caramel Pot de Crème was by far the number one choice.  Its a good, safe dish.  Caramel isn’t my favourite flavor, but everything worked together well. 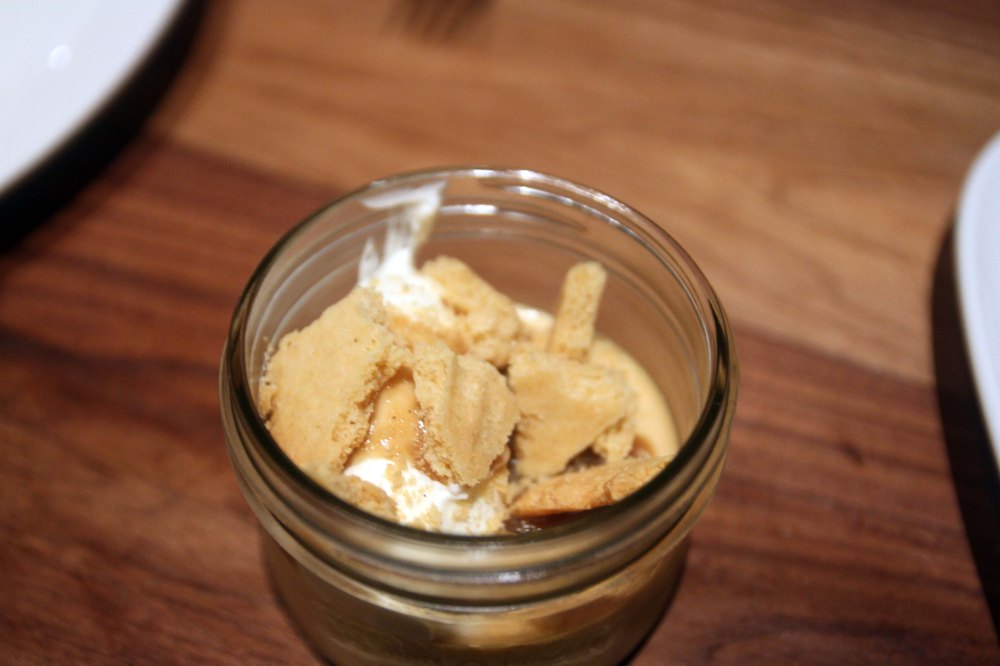 The Strawberry Ice Cream Sandwich was one party members top pick.  While good, I don’t think it really went with the meal.  It totally did not go with my hot drink at the end of the night! 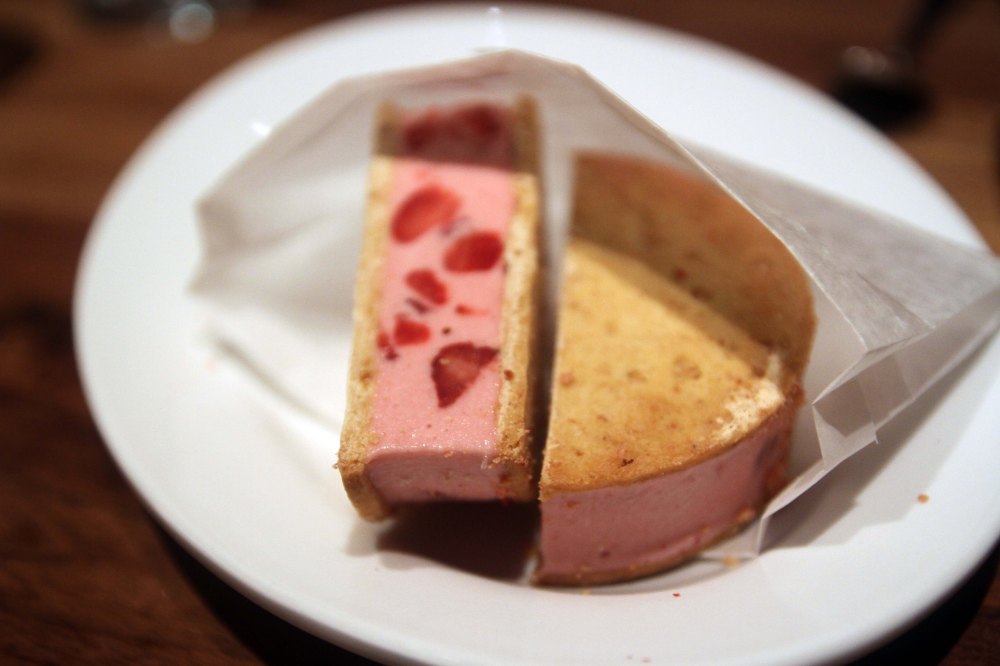 Personally, this Hazelnut Financier was my favourite dessert of the night!  I’ve never had a proper financier before, and after eating this one, I still haven’t.  It was super tasty, and had the perfect texture.  Who doesn’t like candied hazelnuts??

Looking at their fancy espresso machine, I had to order one.  As regular readers of this blog know, I’m a fan of my Nespresso machine.  Yes, it comes from a pod and is instant, however that is my baseline.  My benchmark for the best however is the espresso I had at Eleven Madison Park.  How does this one compare?  Bleeech.  By no means am I a connoisseur, but the beans were over roasted.  I didn’t like this, and it left a bitter note to end my meal. 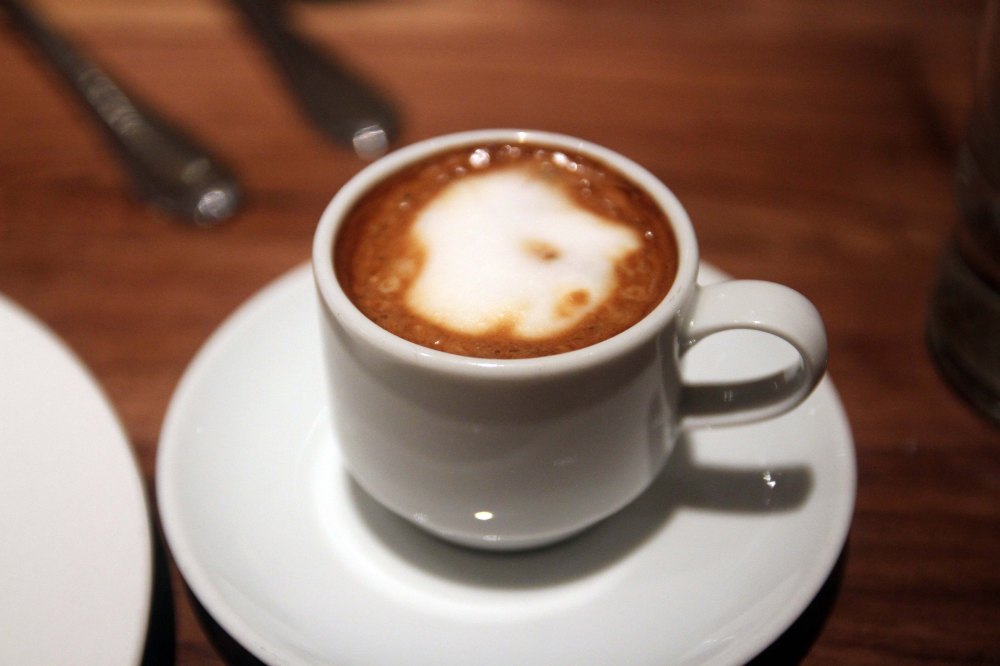 Raw sugar was dispensed in a small jar.  While it looked cool, you have to pour it out into your spoon, as the hole is too small to fit anything other than a table knife into.

The Latte on the other hand, was excellent!  I would totally order that instead of the espresso. 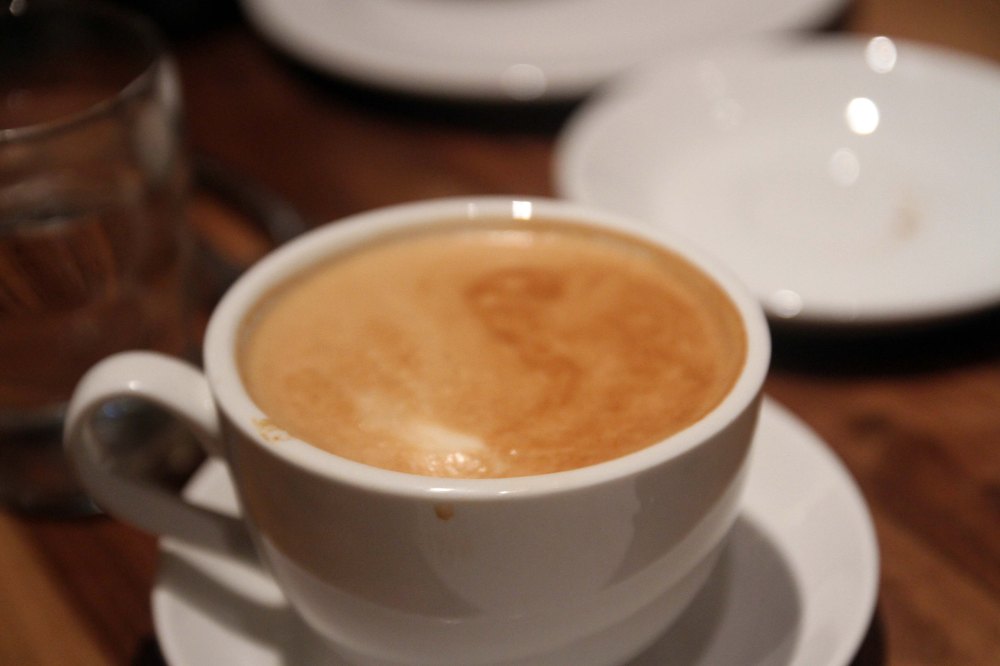 Bonus: For you Corner Gas fans, the table next to us had Brent Butt dining there!  I don’t watch the show, so I didn’t recognize him, but Jax did!  You can also see the sweet pizza oven in their open kitchen. 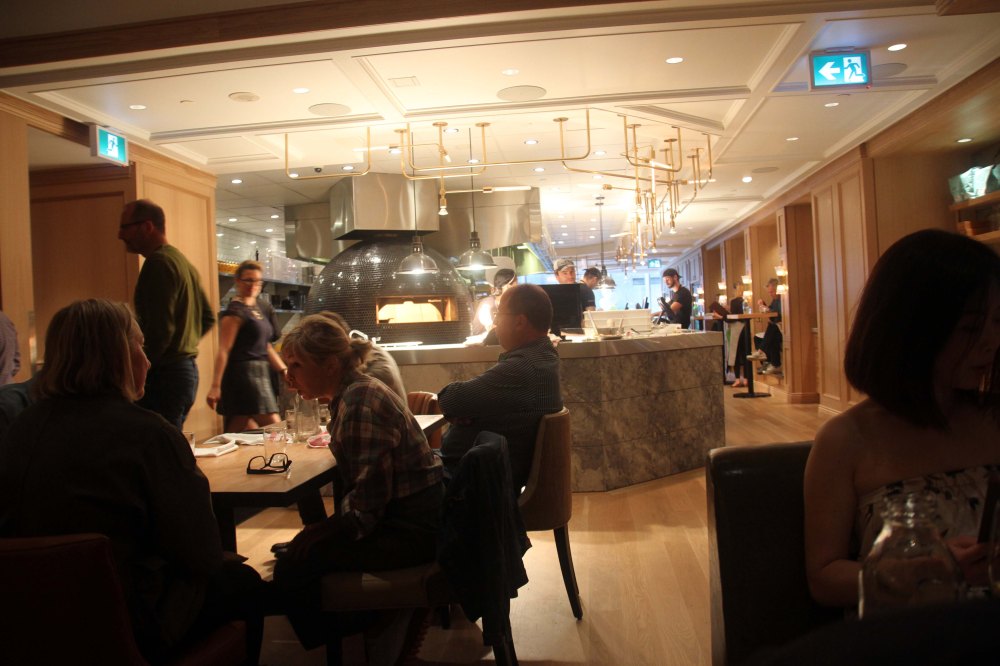 Overall, we had an enjoyable night!  Spending 2 and a half hours here, we weren’t rushed, nor did we feel like service was dragging.  Some things that stood out:

We would definitely come back here to try the rest of the menu (unlike Hawksworth, which we have no desire to re-visit)!  The Small plates were great, but we’d skip the Large menu items.