Since this blog is about Food We Like To Eat, it won’t always be the most intricate, nor super special generations-passed-down dish that you’ve come to expect.  Growing up, my mom always cooked gai lan by steaming it, and then pouring oyster sauce on it.  There’s nothing wrong with that at all!  In fact I still cook that style to this day.  Today’s post is a rather simple vegetarian dish that is a slightly different take on how to serve Gai Lan.

Why Striker?  The first soccer team I ever played on was the Marpole Strikers!  We were a true rags-to-riches team — starting off by losing every game to eventually winning the championship a couple years later!

Heat up your oil in a wok on low.  Do not make it hot.  Throw the sliced garlic into the pan.  The goal is to infuse the oil with the garlic flavour, and not to actually kill the garlic itself.  This is the same technique used to make the absolute killer flavour in King Crab dishes at the Chinese Restaurants here in town.  Let this cook for a solid ten mins on low.  Prepare the gai lan while this is cooking.

Grab your gai lan and cut off the ends of the stalk.  If you have old gai lan, peel some of the skin off as it will be stringy and bitter.  If you have young gai lan, you can skip that step!

Slice it in half.  The stalks will take longer to cook than the flowers. 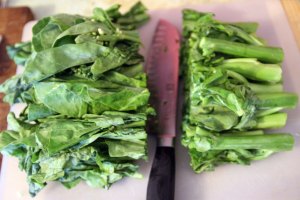 Throw the stalks into the pan of garlic-infused oil.

Cut the mushrooms into thick slices.

After roughly 5 mins of cooking the stalks, add the flowers in.  Cook those for a couple of minutes and then throw the mushrooms in as well.

Stir-fry the crap out of them!  Make sure every last item in the wok is coated with the garlic oil.  You can grind some salt to taste at this point.  Keep cooking until the point just before the flowers start wilting. 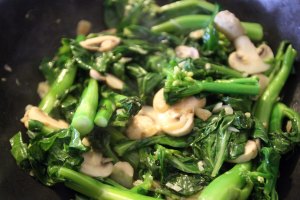 Take it out and serve immediately. 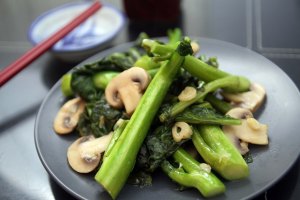 Ta da!  There you have it!  Striker Stir Fry Gai Lan and Mushrooms with a garlic oil!  This may seem oily to many of you, however that is the point.  Much like dipping bread in oil, this dish is meant to highlight that flavour.  This is the perfect side dish when having any bbq meats!